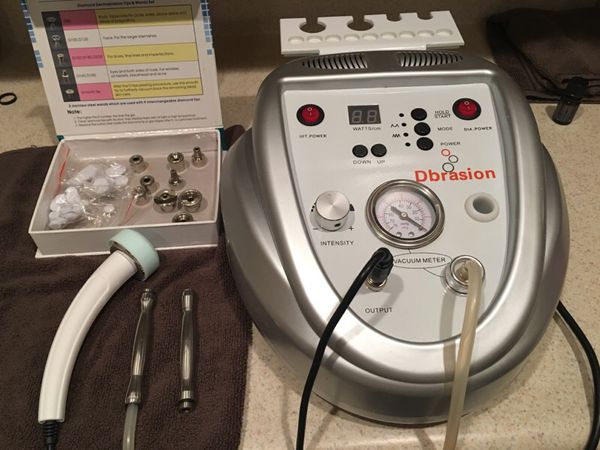 Microdermabrasion is a form of exfoliation for the skin. It was developed in Italy in 1985, and was introduced to the United States in 1996. It grew in popularity quickly and has become a standard staple for many Estheticians.

I’ll admit that I was a holdout on this technology for many years, likely due to my training at the Aveda Institute, where using newer technologies simply wasn’t part of the program or the school’s philosophy on how to treat the skin. As a newly minted Esthetician in 1996, I was conservative and wary of treatments that seemed more aggressive than the soothing, plant-based, gentle treatments I learned at Aveda.

In my earlier skincare years, microdermabrasion was a service mostly offered in medical spas, as a more clinical treatment than relaxing spa treatment, though it’s steadily grown in popularity, and is now offered by Estheticians at all kinds of places where skincare services are offered: medical spas, salon, spas, resorts.

When I opened my own skincare practice in 2012, I knew that microdermabrasion was an essential staple service that I had to offer, but I knew I wanted to do it a bit differently than I’d done it before in previous positions.

At the medical skincare clinic, we offered microderm as it’s own service, following up with a moisturizer but that was all.

In my practice, I saw it as something to add on to a more complete, more involved skincare treatment.

In the beginning for microderm, the design of the machine included crystals that were sprayed onto the skin, then vacuumed up, bringing the top layer of dead skin cells along. creating an effect like a mini-sandblaster!

The most common crystals used are aluminium oxide crystals, also known as corundum. They are second only to diamonds in hardness but are a lot cheaper.

This freshly exfoliated skin was prepped to accept products and allow deeper ingredient penetration into the skin.

Later, the design evolved to a crystal-free, diamond-tipped microdermabrasion system. Some Estheticians prefer to work with the crystals. Personally, I found the crystals to be a bit messy and impossible to completely prevent them from getting in the ears, between the teeth, generally everywhere!

I prefer the crystal-free method.

The diamond-tips are natural diamond chips. They come in a set of 6, with varying degree of abrasiveness. For more sensitive skin, I can choose a lighter ‘grit’ for a more gentle exfoliation, and for thicker, more oil-rich skin or skin that has a lot of scarring and uneven texture, I can choose one that allows more “sanding” and a deeper exfoliation.

Extractions are easier to perform/blackheads easier to remove

Safe for pregnant or nursing Mamas

Care and caution should always be used by the Esthetician when considering whether to perform microdermabrasion on clients.

For most people with healthy skin, there’s no reason why microderm shouldn’t be performed.

I tell my clients that it feels like being licked by a cat, and I often hear that’s a perfect description.

For super-sensitive, sunburned, raw skin, or in the case of open wounds or bleeding pimples or pustules, microderm should not be performed.

Estheticians are happy to explain their choices for your treatment, and you are always the best advocate for your own comfort, care and well-being in the hands of a treatment provider.